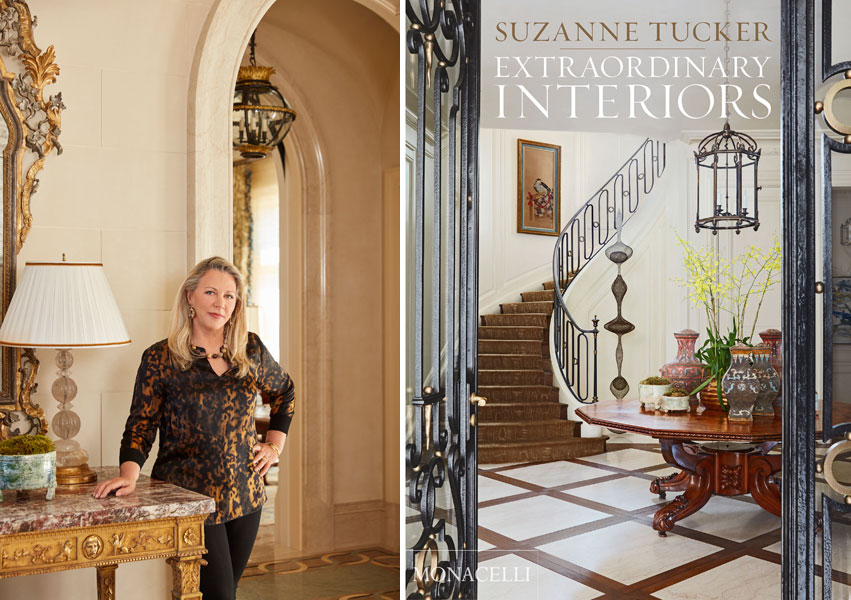 Suzanne Tucker strongly believes that by surrounding ourselves with the authenticity of thoughtful design and timeless architecture, we are able to enrich and enhance the quality of our lives.

She is recognized today as one of the country’s leading interior designers, known for her personal approach and enduring style, attention to detail and her passion for architecture and the decorative arts. Her award-winning projects are frequently published in magazines worldwide. Architectural Digest has honored her repeatedly on the AD100 list of top designers and she is included in the Elle Décor A-list and the Luxe Gold List. Having worked under the legendary Michael Taylor and often referenced as his protégée, she and her husband/partner Timothy F. Marks, founded Tucker & Marks in 1986, building it into the distinguished firm it is today. Suzanne Tucker Home was launched in 2010 with her textile, tabletop and home furnishings line. Suzanne’s first monograph, Rooms to Remember, The Classic Interiors of Suzanne Tucker (The Monacelli Press, 2009) was followed by the publication of Suzanne Tucker Interiors – The Romance of Design (The Monacelli Press, 2013). Her third book Suzanne Tucker – Extraordinary Interiors will be published by The Monacelli Press in the fall of 2022.

Suzanne is one of the four founding Directors of the Northern California Chapter of the Institute of Classical Architecture & Art and currently Director Emeritus, having served on the board for fourteen years. She also serves as a Director on the National Board and has co-chaired the prestigious Arthur Ross Awards in New York since 2014. Suzanne is a sought-after speaker on design and the decorative arts. She has been the Chair of the San Francisco Fall Show since 2015. She also serves on the Board of Directors of the Hearst Castle Preservation Foundation and on the West Coast Council of The Garden Conservancy. In 2020, she received an Honorary Doctorate of Humane Letters from the Academy of Art University.

In 2015 Suzanne received the Design Leadership Award, in 2016 she received an ICAA Julia Morgan Award for Residential Interior Design, and in 2017 Suzanne was the inaugural honoree at the ICAA Northern California Legacy Dinner. In 2020, Suzanne was honored with a Doctorate of Humane Letters from the Academy of Art University.